What is it about Senate Democrats and their inability to pass a budget?

Democrats in Virginia’s Senate have voted to reject the latest budget bill over $300 million in transportation funds to cushion the blow of tolls in Northern Virginia. The tolls are to pay for the extension of MetroRail from Tysons Corner in Fairfax County to Washington Dulles International Airport and Governor Bob McDonnell responded with a sharp critique.

“Today, Senate Democrats cast the most fiscally reckless vote I have witnessed in my 21 years in office. They have killed an $85 billion state budget that benefits all Virginians, for one earmark regarding an 11.4 mile rail project in one district of the Commonwealth. That is extremely irresponsible. Senate Democrats, again, put partisan politics ahead of the needs of 8 million Virginians. They brought their political agendas to the Senate floor, and in the process have put at risk a Bristol teacher’s paycheck, a Chesterfield sheriff’s salary, healthcare for a senior citizen in Hampton, road projects in Richmond, and the fiscal soundness of the entire Commonwealth.”

What leads you to think that the Democrats objection is contrived and disingenuous, is that this scheme was created years ago by Democrat Governor Tim Kaine.

Since 2009, when Governor Tim Kaine signed the deal on the tolls and the rates were publicized, and no state funding was provided, Senate Democrats were silent. They offered no objections to the tolls for nearly three years. Then, at the very end of this session, after killing two budgets on the floor, Senate Democrats decided that they would make that their next issue. This will have serious consequences for all Virginians.

There is a budget impasse in the Commonwealth of Virginia and it has nothing to do with budget issues such as state spending or tax policy. No, the Democrats are now  obstructing a budget plan that was constructed through bipartisan collaboration and cooperation in an effort to reorganize some committees to give their party more power. Democrat Senators Richard L. Saslaw and A. Donald McEachin are asking for more seats on crucial committees. They have also requested that the powerful Senate Finance Committee be co-chaired by a Republican and Democrat.

The current stalemate is set up by an intricacy within the Virginia Constitution that requires the votes of 21 senators to pass a budget. The lieutenant governor cannot cast a tie-breaking vote. With 20 Republican senators and 20 Democrat senators, passage of the budget requires bipartisan cooperation — and the Senate had been working cooperatively. The Senate plan includes countless amendments that were introduced by Democrats and reflects the top priorities they have publicly expressed. Indeed, the spending plan constructed by the Senate Finance Committee can be fairly characterized as the most bipartisan budget proposal advanced in recent history.

Republican Senator Ryan McDougle explains some of the budget compromises;

Democrats objected to increasing the portion of the sales tax dedicated to transportation. They objected to what they saw as an inadequate level of funding for education. They were concerned about funding levels for Medicaid. All of these concerns were addressed in favor of Democrats, with the Senate incorporating their stands into the budget. No additional sales tax revenues are being redirected to transportation, public education is funded at higher levels than achieved in recent budgets passed during Democratic control of the Senate, and health care was funded at a level higher than either the governor’s or the House’s budget proposal.

McDougle also cautions that allowing budget negotiations to revolve around issues entirely unrelated to the budget could set a dangerous and lasting precedent, creating potential for the budget to be held hostage every year due to unrelated legislative disputes.

Some may ask, if the Senate is split 20-20, why not share power? Well, truth be known, despite the even split the voters of Virginia actually gave a mandate to Republicans in 2011. In early 2011 the Democrat controlled Senate crafted a hyper-partisan redistricting plan intended to ensure control by their party regardless of the expressed will of the voters. In spite of this effort the Republicans won control in the November 2011 election. Republican candidates for Senate out-polled their Democrat counterparts by 57 percent to 40 percent. But gerrymandered districts skewed that result, electing more Democrats than the popular vote reflected.

The balance of power in the Senate now rests with its presiding officer, Lt. Gov. Bill Bolling, a Republican. Coincidently, Bolling won 57 percent of the vote in his most recent election in 2009. So while the new Republican majority may be numerically narrow, it reflects the clearly expressed preferences of the 57 percent of Virginians who voted Republican for Senate in 2011 and lieutenant governor in 2009.

Virginia Senate Democrats worked hard to win concessions in this budget and they now have a choice; stop obstructing and pass this budget or continue to make non-budgetary demands and shut down the commonwealth which will undoubtedly result in a negative backlash. Is there one courageous Democrat left in the Virginia Senate?

To his credit Governor Bob McDonnell has talked with many members of the Senate Democratic caucus, in an effort to break the standoff. McDonnell commented,

“There are many over there that truly are statesmen, really do want to see Virginia be put first, and I think that they don’t want to be in the embarrassing situation of having to look their constituents in the eye and [say], ‘I killed the Senate budget because I wanted to have more power and better committees,’” he said. “That’s not a good argument. That’s not the way people on either side do things around here.”

Chairman of Democratic Party of Virginia: If we can’t cheat we can’t win…

…. so everybody run down to the Capitol to collectively bang your spoons on your highchairs and wail like little babies.  Or something.

From an email I received from the Chairman of the Democratic Party, Brian Moran, of Virginia on Saturday:

Republicans are pushing legislation to prevent thousands of Virginians who do not have government-sponsored identification from casting a regular ballot on election day. They want to make people who register to vote wait five days before casting an absentee ballot. They are also trying to make it illegal to help more than two people with an absentee ballot application in the same election year.

The last part seems to imply that Democrats feel their voters are so stupid that they are unable to fill out a ballot application without the guidance of a Democratic Party operative.  That’s pretty insulting, but I guess if you’re of the chattel class beholden to government for your sustenance you’ll just take the insult with a big old smile on your face.

They know that the only way they can win this year’s elections is to keep turnout low and they are trying to rig them before they even happen.

Let me rewrite that for ya, Brian…

Democrats know that the only way they can win this year’s election is through fraudulent voting by unqualified voters and the Republicans attempt to prevent Democrats from rigging the election is a diabolical plot to keep us from stealing another election.

Anyway, the professional rabblerousers will be assembling tomorrow at 9:30am at the Bell Tower on the Capitol grounds in Richmond if you’re interested.

We have all heard the main stream media’s reports that the Tea Party movement is losing steam and fading away. I guess no one has told the Virginia Tea Party Alliance. Unlike most of the country, Virginia has a big election this year with every one of the 140 seats of the General Assembly on the ballot. The House of Delegates currently has a Republican majority but the in Senate the Democrats have a slim 22 -18 majority and with a three seat pick up the Republicans can flip the Senate. The Virginia Tea Party Alliance has formed a PAC and they have produced this ad to continue what they started in 2009 with the election of Governor McDonnell and Attorney General Ken Cuccinelli.

The Virginia Society for Human Life, the nation’s oldest pro-life organization, is looking to change the face of the pro-abortion majority in the Virginia Senate.The VSHL was founded in 1967, before Roe v. Wade, in reaction to an effort by dissident elements in the fields of law, medicine, public health and eugenics to “liberalize” abortion laws and continues to this day to work for the restoration of the protection of the life of the unborn child in law and public policy.

.In a recent interview with World Magazine, VSHL President, Olivia Gans, discussed the organization and their focus in the near term. While the VSHL is pleased with the passage of abortion clinic regulations in the last legislative session, she cautions Pro-Lifers must understand that while these regulations are important, they should be seen as a beginning point for a much larger conversation about protecting the unborn child.

Ms. Gans went on to state that right now,the single most important thing is this fall’s Senate elections. She points out that the pro-abortion majority in the Virginia Senate has been primarily holding up all major pro-life legislation for the past six years or more and they do not represent the pro-life view of the commonwealth of Virginia.

The Society is also talking to legislators about passing legislation that says no abortion can be performed after a baby can feel pain. Similar legislation has already been passed in Nebraska, Kansas, Alabama and Oklahoma. Scientists have measured that the child can feel pain from 20 weeks.

Gans would like to encourage people to go to the National Right to Life website (nrlc.org) and the website for VSHL (vshl.org). and get involved, if only to get on the email list.She said the VHSL is desperately in need of more talent, people who are good writers, artists, people who want to learn to be speakers or do computer work. I agree with the president when she stated, “This is probably one of the most exciting things you could ever do because your efforts will be used to promote human life in Virginia.”

We all remember when White House correspondent Tommy Christopher Tweeted his heart attack, well we now have an interesting string of tweets from Virginia’s newest member of the House of Delegates. Greg Habeeb, who was elected in a special election to fill the seat of Rep. Morgan Griffith, is one of the most active legislators on Twitter. Last night  after a full day of delegate duties he elected to get a little exercise by shooting some hoops and ended up in the ER. I’ll let his tweets tell you the rest of the story.

Playing a little bipartisan basketball at VCU. I’m too old for this. about 10 hours ago via ÜberTwitter

Yeah, remember when I said I’m too old to be playing bball? To prove the point, I’m now at the VCU ER. Yay new guy. about 9 hours ago via ÜberTwitter

@notlarrysabato Come on man. That foot shot was beautiful. I’m guessing my twitter followers are throwing up as I type. about 8 hours ago via ÜberTwitter in reply to notlarrysabato

Awesome. My foot’s broken in a couple spots. Just keeps getting better and better. about 7 hours ago via ÜberTwitter

For the record, I made the basket on the play I broke my foot. about 7 hours ago via ÜberTwitter

I’m waiting patiently for RPV or the Speaker to issue an official condolences statement for my foot. Forget HD91, this is serious guys. about 7 hours ago via ÜberTwitter

They look at you kind of funny when you fill a Percocet prescription at 1am. about 5 hours ago via ÜberTwitter 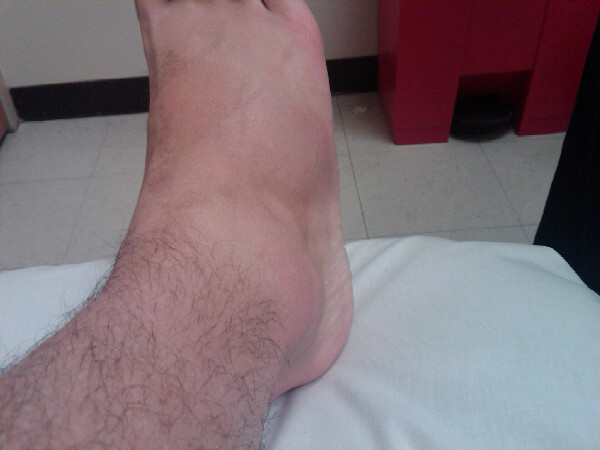