Let Us Honor Those to Whom Honor is Due

Obama to address the nation about withdrawing American combat troops from Iraq.

President Obama has scheduled his second oval office address to let the American people know that he can now officially check off another campaign promise. In February Barack’s right hand man Joe Biden prepared us for this day; “I am very optimistic about — about Iraq. I mean, this could be one of the great achievements of this administration. You’re going to see 90,000 American troops come marching home by the end of the summer. You’re going to see a stable government in Iraq that is actually moving toward a representative government.”

On Saturday Obama said this, ” As a candidate for this office, I pledged I would end this war.  As President, that is what I am doing.  We have brought home more than 90,000 troops since I took office.  We have closed or turned over to Iraq hundreds of bases.  In many parts of the country, Iraqis have already taken the lead for security.”

Let me be clear about this, this is a great achievement but I disagree with the attribution.

Nearly every morning I begin my day with a brisk walk through our neighborhood.It is a fairly large and there are multiple routes I could take but and everyday I follow the same trek. About three-quarters of the way through I pass the home of Maris and Vera Adcock which puts things in perspective for my day.

You see Maris and Vera Adcock are the Gold Star Parents of Captain Shane Timothy Adcock. Captain Adcock made the ultimate sacrifice on October 11, 2006 in Hawijah, Iraq. Captain Adcock and his sister grew up in my neighborhood, they went to school with my kids.

Like many Americans, none of my immediate family members serve in the armed forces. During this war, unlike the second World War, most of us have not had make any serious sacrifices. To keep things in the proper perspective I make sure that  I pass by the Adcock’s home everyday.  As I pass I view the small flag in the window with a  gold star and it reminds me that there are men and women in our armed forces are laying there lives on the line for us everyday, it reminds me that parents, spouses, children are left behind so their loved ones may serve us and allow us to live our lives. It is to those that have served and their family members that I attribute this great achievement. It is to those we are forever indebted to.

Let us not forget those to whom honor is due.

A caison carrying the remains of Army Captain Shane Adcock of Mechanicville, Virignia,
makes its way through Arlington National Cemetery on Friday, October 27, 2006

The Gipper stars in this new video, released by the Republican Study Committee.  It’s as powerful as it is chilling, to hear Ronald Reagan’s predictions about government, and then see today’s Democrats fulfill those prophecies.

Today’s Democrats are led by a woman who said we needed to pass a massive health care takeover bill in order to find out what’s in it.  Well, today’s Democrats are also led by a man who is evidently corrupting the Food & Drug Administration for the sake of “bending the cost curve” to make Obamacare somewhere near fiscally feasible.  That’s something he said he would never do – he even promised that if you like your health care/doctor/you name it, you could keep it.  We’re finding out what’s in the bill – death for those who suffer, and the end of free choice for everyone else.  Oh, and higher taxes and probably national bankruptcy if we stay on the path we’re on.

Today’s Democrats…sensitivity to Islamists at the expense of Americans, a lawsuit against a state that’s trying to enforce border security, and race bombs being thrown all about for fun and political profit.

Will Texas Democrats “warn” Virginia too?

Law enforcement officials in Virginia can inquire into immigration status of those they stop or arrest–just as they can under a controversial new immigration law in Arizona–Virginia Attorney General Ken Cuccinelli has ruled in an official legal opinion.

Written in response to a request for legal advice from Del. Bob Marshall (R-Prince William), Cuccinelli ruled that police officers and other legal authorities can look into the immigration status of anyone stopped or arrested.

A 2008 Virginia law requires that law enforcement check the immigration status of anyone taken into custody on suspicion of having committed a separate crime. Cuccinelli’s opinion could expand such inquiries to those who have been legally stopped by law enforcement, for instance those pulled over for a traffic violation or at a police checkpoint.

Meanwhile, those not coming under the Texas Democratic Party’s idiotic “warning” include Mexican drug cartels, who have put a huge pricetag on a American elected official’s head.

On the day parts of Arizona’s immigration law, SB 1070, went into effect, Maricopa County Sheriff Joe Arpaio is in the news for another reason: there’s a price on his head – allegedly offered by a Mexican drug cartel.

The audio message in Spanish is a bit garbled, but the text is clear.

Funny, I don’t see the Texas Democrats issuing any “warnings” for this.

Posted by Alan Smithee on August 2, 2010 in freedom, politics, security

Our rogue judicial system continues to rule as if it has primacy over states and the two other branches of the federal government.  Judge Susan Bolton overruled the major provisions of AZ’s immigration law.

Look for this one to get appealed all the way to the Supreme Court and Kagan will have to recuse herself, I suspect.

This may turn out badly.

Posted by P. Henry Saddleburr on July 28, 2010 in politics, security

Oklahoma woman proves value of 2nd Amendment, takes out a couple of criminals

An innocent woman is alive today – and a criminal is dead – because of the right to bear arms.  If it were in my power, I’d make this woman an honorary Texan.

A woman shot two intruders breaking into her Tulsa, Okla., home killing one and critically wounding another, police officials say.

Thursday’s alleged home invasion — in which the woman shot Darreon Carter, 18, and Daniel Holman, 23 — was Tulsa’s second such incident in as many days, the Tulsa World reported Friday.

Police Capt. Travis Yates said the woman — whose name was not reported — was walking back to her Brighton Park apartment about 3:50 a.m. after going to a fast-food restaurant when Carter and Holman allegedly forced their way inside, demanding money.

The woman cooperated until one alleged intruder told her to undress, when she pulled a revolver from her purse and shot him, the newspaper said.

Word on the street is, she has a concealed carry permit.

More: Doctor Bulldog has video.  And here’s the police reaction, which tells you that this didn’t happen in a blue dot like, oh, Austin.

“It seemed to be a courageous act, protecting their home and their life,” [Tulsa police Capt. Travis Yates] said. “They were shaken up, but it was sort of impressive — they weren’t hysterical.”

Posted by Alan Smithee on July 27, 2010 in freedom, security

The metrosexual in question here is Julian Assange, the odd and shifty character behind WikiLeaks.  That web site is today’s Pentagon Papers on steroids – it just published thousands upon thousand of documents about Afghanistan that Assange hopes will screw up the war and hand it over to the Taliban.  Oh, that’s not what he explicitly says.  But it would be the outcome if we bug out.

SPIEGEL: You are about to publish a vast amount of classified data on the war in Afghanistan. What is your motivation?

Assange: These files are the most comprehensive description of a war to be published during the course of a war — in other words, at a time when they still have a chance of doing some good. They cover more than 90,000 different incidents, together with precise geographical locations. They cover the small and the large. A single body of information, they eclipse all that has been previously said about Afghanistan. They will change our perspective on not only the war in Afghanistan, but on all modern wars.

SPIEGEL: You could have started a company in Silicon Valley and lived in a home in Palo Alto with a swimming pool. Why did you decide to do the WikiLeaks project instead?

Assange: We all only live once. So we are obligated to make good use of the time that we have and to do something that is meaningful and satisfying. This is something that I find meaningful and satisfying. That is my temperament. I enjoy creating systems on a grand scale, and I enjoy helping people who are vulnerable. And I enjoy crushing bastards. So it is enjoyable work.

Here’s a thought, tough guy.  If you really want to crush bastards, how about taking on Mahmoud the Mad.  Or Kim Jong-Il.  Or the Venezuelan Clown.  These fellas all might be Americans enemies, too, but they’re real bastards.  They’re totalitarian dictators.  They wreck press freedom.  They put innocent people in gulags by the thousands, for sport. They kill gays by crushing them under stone walls, and they threaten activists like Ayaan Hirsi Ali.  They think honor killings are good civic action.

So what do you say, Ass-ange – how about strapping on an Interceptor, locking and loading as a Marine and taking on the evil bastards who do stuff like this?

No?  Can’t quite find that requisite rage to take some real action, friend?

Crushing actual bastards is obviously too much for the WikiFreak.  It would require actual courage.  He’s just a typical red diaper baby out making the world safe for Marxism.

Looks like we’ve got a 22 year old, pro-gay, anti-American Pfc as the culprit. 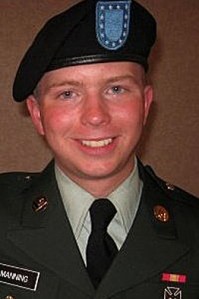 What me worry? Just sayin'.

Bradley Manning became disillusioned with the U.S. Military because of an incident involving the….Iraqi Police.

According to the chat logs, Manning’s turning point came when he watched Iraqi police detain 15 people for printing anti-Iraqi literature that turned out to be a scholarly critique of Prime Minister Nouri al-Maliki.

“After that … I saw things differently,” he wrote.

Manning began an online conversation with a former computer hacker, R. Adrian Lamo, who became concerned (probably about running afoul of the Government again) and turned him into the authorities.

It seems that Mr. Manning also had custom dog tags made that describe him as a ‘Humanist’.  Who in the H-E-double hockey sticks is letting some of these people into the military?

And as to be expected, some left wing moonbats have already formed a legal defense fund.  Of course you have, little darlings.

The Bradley Manning Support Network passed a resolution on July 12, 2010 to begin fundraising for Manning’s legal defense. At this time, the Network estimates between $50,000 and $200,000 in legal fees and expenses will be needed to mount a vigorous defense on behalf of Manning. They have also indicated that WikiLeaks, who published and promoted the Collateral Murder video, has promised a significant donation to Manning’s defense.

Posted by Alan Smithee on July 26, 2010 in politics, security

Does it matter that Tennessee’s Democratic governor has now signed an immigration enforcement law similar to Arizona’s?

Well, if Tennessee doesn’t find itself staring down the barrel of an Obama lawsuit, we’ll have our answer.

Posted by Alan Smithee on June 29, 2010 in politics, security