“It takes someone with no shame and a lot of money to get the public to believe a total lie.”

I agree with that statement, but not in the context in which it was said.

John Kerry, in the Obama campaign’s latest email, wherein the disgraced former presidential candidate who unsuccessfully attempted to elevate his military service in Viet Nam during his 2004 bid for the presidency was met with an effective Swift Boat response that exposed his duplicity and the fact that he dishonored his service, which derailed his bid and heaped upon him the shame that he’d earned.

Here’s the email. Comments inside of brackets [] are mine.

When I was the Democratic nominee for president in one of the closest and toughest elections in history, [um….not that close John. Don’t flatter yourself] a group of billionaires did something unprecedented:

They wrote million-dollar checks to fund lies about my service on what were called “Swift Boats” in Vietnam — and in so doing, they turned the boats my crewmates and I served on into a new political shorthand for the most vicious smears imaginable: [the truth] “swiftboating.”

But guess what: Bob Perry, the deep-pocketed funder of the “Swift Boat Veterans for Truth,” just gave $3 million to Mitt Romney’s Super PAC.

One man. Three million dollars. And that’s just the start. [Romney is our default candidate but it seems Perry’s investment might be the best bet at this point. I’ll probably kick in some dough myself after the dust settles.]

I know all too clearly that these guys will do or say anything to win. [Personally raped. Cut off ears. Cut off heads. Taped wires from portable telephones to genitals and turned up the voltage…]
They’ll stop at nothing. [Cut off limbs, blew up bodies, randomly shot at civilians, razed villages in a fashion reminiscent of Ghengis Khan…]

But forewarned is forearmed. Their multi-million dollar smear tactics were new in 2004; in 2012 we know their playbook, and shame on us if we don’t tear it into shreds. Join me and we will stop the “swiftboating” of President Obama.

[Hey John. We don’t even need your phony testimony before Congress to defeat this disasterous presidency. We’ve got it all on video archive. He’s toast]

Fight back by donating $3 or more today [I would. But I had to put a gallon of gas in my car today. at this critical deadline moment.

It takes someone with no shame and a lot of money to get the public to believe a total lie.

[Yes. Yes it does.. And although a man with no shame like John Kerry teams up with a man with a lot of money like Barack Hussein Obama, it simply won’t work this time.]

Unfortunately that’s what we’re up against.

Let’s be ready for it — let’s fight back.

What, were Jimmy Carter or Bill Clinton unavailable for this desperate plea?

This, my friends, is what I call a positive sign for the nation. To bring out a failed presidential candidate, the fact that a man who ran on his questionable military record, a man who has a well documented history as an anti-American activist is brought forth to beg for chump change on behalf of the elected anti-American cheers me up. A lot.

Did you notice that this Democrat Senator couldn’t fund raise based on this president’s accomplishments? There aren’t any. Kerry was reduced to HEY THESE CONSERVATIVES REALLY SUCK BECAUSE THEY EXPOSE US LIBERALS FOR WHAT WE ARE.

As insane as this all appears, this kind of desperation makes me really happy.

Oh and I usually adorn my posts with photos. These two ain’t deserving of my effort. You know what they look like and I’m actually doing them a favor by not picturing them.

Tiger Wood’s 924 Day PGA Tournament Drought Over. U. S. Citizen’s 1082 Day Drought without a National Budget? Not so much

That’s his first PGA Tour victory since September 13, 2009.
It was 157 days before Tiger’s last victory that the the Democratically controlled United States Senate, also riddled with scandal and shame, passed a budget. April 9, 2009.
Congratulations to Tiger and shame on the Democrats. 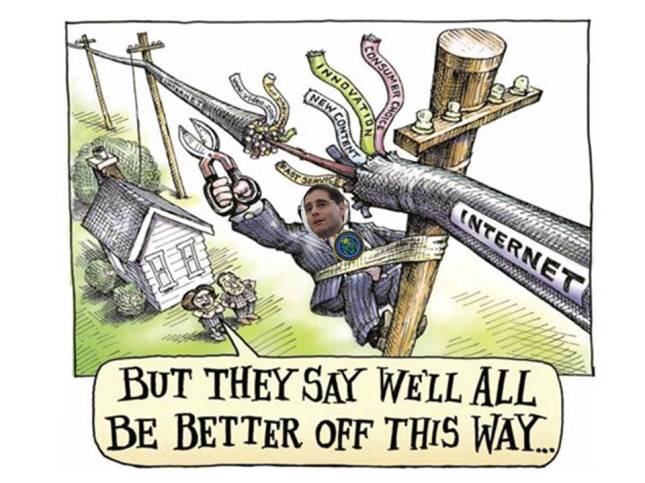 The spending bill that passed the House on Saturday included language to prevent the FCC from using funds to implement its controversial net neutrality rules, which it passed in December over strong objections from Republicans.

The four Democrats went on to write, “We ask you to object to any similar efforts here in the Senate. Such action aims to strip the FCC of its legal authority over modern communications and hand control of the Internet over to the owners of the wires that deliver information and services over them.”

In testimony before the Committee on the Judiciary Subcommittee on Intellectual Property, Competition and the Internet Laurence Brett Glass owner and founder of Lariat, a wireless Internet service provider in Wyoming, makes a compelling argument for repealing the FCC net neutrality rules.

Firstly, the rules address prospective harms rather than any actual problem. Contrary to what some advocates of regulation say, ISPs have never censored legal third-party Internet content. Customers would quickly move to competitors if they dared to try. Secondly, even before the rules were issued, the Commission’s NPRM created uncertainty, which, in turn, drove away investors. The final rules are vague, permitting “reasonable network management” but not fully defining what the word “reasonable” means.

“The rules also allow anyone – whether or not he or she has service from the provider in question – to file a formal complaint alleging violations. Even now – before the rules have taken effect! – groups here in Washington, DC have filed complaints against Metro PCS for offering an affordable smartphone service plan which prohibits a few bandwidth-hogging activities. There are other plans available for those who do not like those terms, and the minor restrictions are more than worth the fantastic deal users get. But Metro PCS, one of the shrinking number of competitive mobile wireless providers, must answer the complaint and may be forced to stop offering service plans that customers willingly choose and enjoy. ”

“My own company, which is much smaller than Metro PCS, could suffer a similar fate. Our most popular residential service plan comes with a minor restriction: it does not allow the operation of servers. Mr. Chairman, most Internet users would not know what a server was if it bit them, and have no problem uploading content to a Web site such as YouTube for distribution. Business customers that do need to operate servers can obtain that capability by paying a bit more to cover the additional cost of expensive rural bandwidth. But if the rules take effect and the FCC decides against Metro PCS, we’ll almost certainly be forced to shift everyone to the more expensive plan. We will therefore be less competitive and offer less value to consumers.

We will also hesitate to roll out innovative network management practices and services, for fear that the Commission would find fault with some aspect of them. For example, selling priority delivery of data – even for a new high-tech service, such as telepresence – is strongly disfavored by the rules. This is the equivalent of telling UPS or FedEx that they cannot offer shippers overnight delivery, because it is somehow unfair to those who use less expensive ground service.”

The Republicans in the House are acting responsibly in their role as a check on the unauthorized overreach of the FCC. Commissioner Robert McDowell explains it well in his dissent;

Today, the Commission is choosing to ignore the recent past as it attempts the same act. In so doing, the FCC is not only defying a court, but it is circumventing the will of a large, bipartisan majority of Congress as well. More than 300 Members have warned the agency against exceeding its legal authority. The FCC is not Congress. We cannot make laws. Legislating is the sole domain of the directly elected representatives of the American people. Yet the majority is determined to ignore the growing chorus of voices emanating from Capitol Hill in what appears to some as an obsessive quest to regulate at all costs. Some are saying that, instead of acting as a “cop on the beat,” the FCC looks more like a regulatory vigilante. Moreover, the agency is further angering Congress by ignoring increasing calls for a cessation of its actions and choosing, instead, to move ahead just as Members leave town. As a result, the FCC has provocatively charted a collision course with the legislative branch.