Which means that today those 603 Volt owners were able to drive a cumulative 15,678 miles for a distance of 26 miles per car as a coal powered vehicle, before the car switched over to the other carbon based product that powers it, which happens to be gasoline, just like what you burn in your car.

Premium gasoline, that is.  Um.  Yeaaaaah.  I’m so GREEN.

I charge up my electric golf cart using coal to primp and preen my way through town, the object of all my neighbors adoration because I am not burning gasoline like you serfs that don’t own a $46,000 coal burner.  And we slightly over 10 people per state are primping and preening and driving their coal burners about town as well.  We are superior to you.  Worship our awesomeness!!

I loved Eric Bolling’s story on Fox News’ “The Five” about how he’d been ragging on the Volt, complaining about the massive citizen funded bailout of GM, the subsidies to get people to buy the Obamamobile via rebate, and so forth.  GM contacted Bolling, unhappy with his Volt bashing and offered him the car for a few days.

He charged it up and headed to work only to find that the battery took him a whopping 26 miles before the car switched over to gasoline.  Did I say Premium gasoline?  Yes I did.

At least it didn’t burst into flames for him and at least he wasn’t in an accident where EMTs wouldn’t be able to use the jaws of life for fear of being electrocuted.

Watch the video.  It’s spectacular and morbidly funny, in a big government gone wild, we’re totally screwed as a nation, the idiots are running the show kind of way. 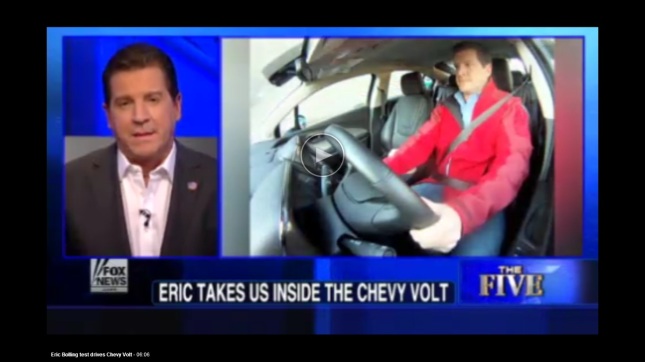