Is this Voter Fraud in the Making?

This mailer arrived in our box for my wife today.  My first suspicion was that this mailer was under her ‘familiar’ name, not her ‘legal’ name. Plus, she’s already registered to vote.

But there was something fishy about this mailer so I couldn’t help but delve deeper.

It appeared to come from the Virginia State Board of Elections, but upon further investigation it actually came from the Voter Participation Center, which is a partner organization with the George Soros funded Center for American Progress and both groups have direct ties to the Obama White House.  It started out as part of the Tides Foundation. Looking at the biographies on these sites show lots of people with ties to the Obama and Clinton Administrations, and is part of the Democrats’ criminal syndicate. Have a look at this from Discover the Networks. And this from Wikipedia.

The VPC also focuses on educating policymakers and media on issues impacting what it calls the “rising American electorate”, including a series of reports produced in March 2010, in partnership with the Center for American Progress.

Now.  Notice the address on the return envelope 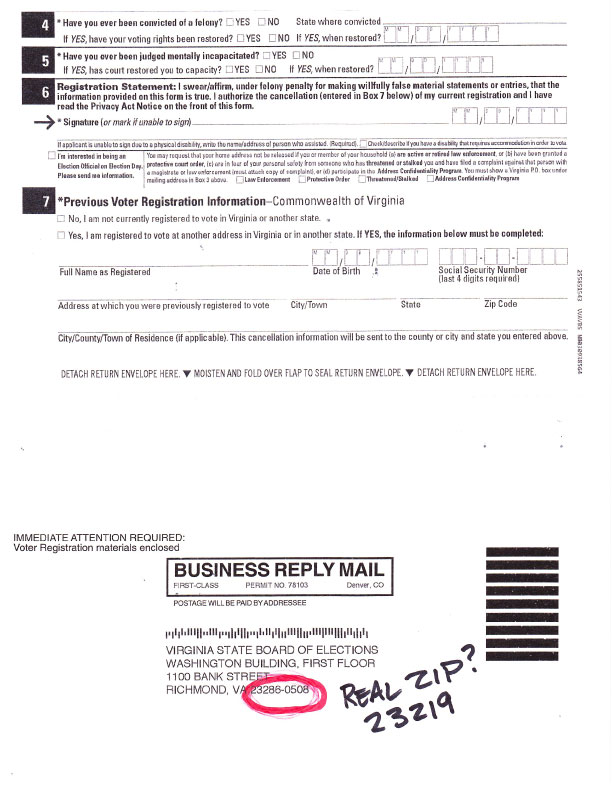 The entire address for the State Board of Elections is correct up until the zip code, so this is NOT going to the State Board of Elections at all, but to some unknown post office box to land in the hands of God knows?  That you are to put your full name, Social Security Number, address and date of birth is a real cause for concern in the age of rampant identity theft.  But I digress.

Notice how official looking this is, then notice the black print in the gray background showing Voter Participation Center, with an address of 7109 Staples Mill Rd, #160, Richmond, VA

I decided to take a little ride to see what was at this address and here it is.

After more digging it turns out that the very same thing happened in Wisconsin back in February, including the zip code spoofing of their Government Accountability Board.  The blogger over at the Lizzie Files put up a post, showing the exact form from the same group with minor differences like the mailing address.

Also in February, VPC was sending out invalid forms in Colorado.

World Net Daily just reported that VPC doesn’t much care if they’re mailing these forms to non-citizens, either.

VPC Chief Operating Officer Gail Kitch said the potential for voter fraud and citizenship status is not the group’s concern.

“That’s not really the issue,” she said. “I couldn’t answer that question based on the level at which we’re involved. I mean, their citizenship is not something … we would not have any way of knowing that.”

Kitch added that her organization is relying on the integrity of those who receive the applications.

“I think the person themselves, the person who is receiving the form, has the obligation. We’re just sending the form; we’re not even registering people to vote,” she said.

“This is not issue we’re addressing,” she said. “In other words, is this person actually a U. S. citizen?”

Be very, very cautious this election cycle. The Democrats are up to their usual corrupt behavior and there is sure to be more of it coming down the pike.

UPDATE:  Look for more information sometime tomorrow.  This mailer was received over the weekend so contacting the State Board of Elections, the United States Postal Service or Voter Participation Center was not possible.  Those are on my To Do list for first thing tomorrow.

I’ll fill you in with the results of my discovery as soon as I can.

UPDATE: The call to the State Board of Elections was a bit disappointing, when they told me to just ‘Destroy It’, then furnished a phone number that turned out to be Voter Participation Center’s unsubscribe line.

In communications with J. Christian Adams from the Election Law Center, he indicated that it’s not illegal, even if they are spoofing the address.  But since nobody knows who is actually receiving this highly sensitive information and what their intentions are or how trustworthy the recipient is.

More calls have been made and the Attorney General’s office has been made aware, as has the Commonwealth’s Attorney.

Additional calls and inquiries are under way.

Why Obama Will Lose in a Landslide

This was sent to my by a friend.  A Las Vegas odds maker breaks it down by the numbers.  I concur with his analysis.

Most political predictions are made by biased pollsters, pundits, or prognosticators who are either rooting for Republicans or Democrats….

…First, most pollsters are missing one ingredient- common sense. Here is my gut instinct. Not one American who voted for McCain 4 years ago will switch to Obama. Not one in all the land. But many millions of people who voted for an unknown Obama 4 years ago are angry, disillusioned, turned off, or scared about the future. Voters know Obama now- and that is a bad harbinger.

He’s predicting a disaster for Obama.  I’m merely hoping and praying for one.

Go read it.  It’ll put a spring in your step and steel your resolve.

Also bear in mind that the winner of the Presidential race will bring down ticket candidates across the finish line with him.  Senators and Congress Critters are inexorably linked or not linked to the preezie, like it or not.

For instance, if Obama loses Virginia, which is highly probable, Timmy Kaine will go down with him in the Senate race.  That Timmy Kaine is an Obama puppet makes Timmy extremely vulnerable.

Occupy Unmasked was one of the many projects that Andrew Breitbart was working on at the time of his untimely death.  Along with Citizens United’s David Bossie, Producer Steve Bannon, Lee Stranahan and Brandon Darby, they were building a compelling indictment of the Occupy movement on video.   They also lay out Occupy’s undeniable link to the Obama crime family..  Directly.  Without a doubt.  Obama IS Occupy.  Occupy IS Obama.

I was fortunate enough to see  Breitbart promote this endeavor at the last CPAC, less than a month before his unbelievable exit from the planet.  On February 12th I posted this about Occupy Unmasked.

Occupy/Obama brown shirts tried to put that CPAC under siege, infiltrating and attempting to disrupt the event, following David Axelrod’s instructions, as dictated to him by his Uber-Alinsky-meister Barack Obama.  Obama’s brown shirts were in high gear during CPAC.

This Citizens United video will tell you who is behind Occupy, who is orchestrating them, how they operate.  Brandon Darby and Lee Stranahan will tell you, from the inside out, what is going on with this rabble.  Darby and Stranahan were once on the other team, took a step back and then realized that they were on the wrong side.  They thought the left was about fighting for individual liberty.  Their encounters with the far left disabused them of that notion forever.

You can now order ‘Occupy Unmasked’, which is set to be released this month.  I sat in the front row of the blogger preview with Breitbart, Bossie, Steve Bannon, Darby and Stranahan. The information….new information…was mesmerizing and fantastic then.  Andrew knew theatrics.  Darby knew inner workings.  Andrew knew politics….particularly that of the left.  Stranahan knew  inside baseball leftism.  And Andrew knew how to dissect leftist critics.  In retrospect, that day is forever seared into my memory bank.  And most of it is there if you click on ‘Andrew Breitbart’ in the category section of this blog.  It’s important video….even if the videographer sucks.

Needless to say, I ordered a few copies of ‘Occupy Unmasked’ tonight.

I suggest you order yourself at least one.

From the Washington Post reporting from the Federal Reserve: 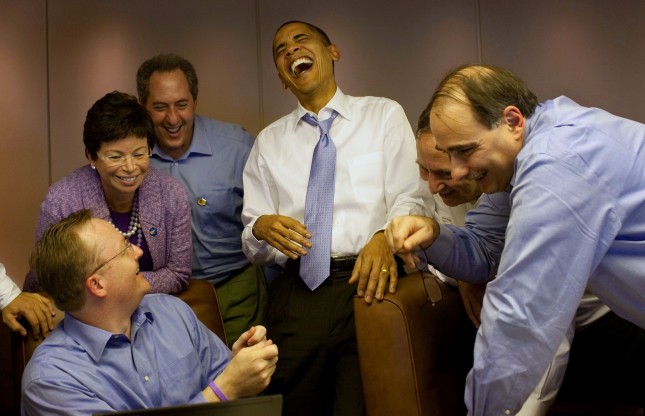 Our Evil Plan is Working to Perfection

Give the man 4 more years and he’ll finish the job.

And don’t try to tell me that this is unintentional. It’s part socialistic redistribution, part reparations.

‘The Private Sector is Doing Fine.’

The RNC is all over the president’s idiotic statement from his presser this morning. That’s what I call rapid response.

But as for the statement itself, either Obama has resumed his cocaine fetish and is trippin’ or he is just bald face lying.

An ad from Ron Gould, Congressional candidate in Arizona’s 4th District. I don’t know anything about him, but he is running in the primary against Paul Gosar, who received an 84 from the American Conservative Union for 2011. That is in contrast to fellow Republican Congressmen from Arizona Trent Franks, Ben Quayle and Jeff Flake who scored perfect 100s, with David Schweikert following with a 96.

Someone get this precious little snowflake a tissue.

I suggest that this man skip over the border and move to Canada if that’s the way he feels. He is apparently incapable of accepting the reality that the power play against the citizens of Wisconsin was an epic FAIL and that the voters made that loud and clear.

Tell me. What, exactly, have the Democrats won since the Great Immaculation?

2009: Virginia swept away its legacy of two consecutive Democrat Governors by electing Republican Bob McDonnell, along with Lt. Gov. Bill Bolling and the exceptional Ken Cuccinelli as Attorney General. Republicans also took a larger majority in the House of Delegates.

In New Jersey they elected Chris Christie as Governor, the first Republican to win a statewide election in the Garden State in 12 years.

Then there was the November bloodbath, when the people tossed 58 members of Congress, 5 Senators and 53 Representatives. Remember Blanche Lincoln, Alan Grayson and Bob “Who are YOU?” Etheridge?

And the bloodbath manifested itself up and down the ticket, with governorships, state houses, and county leadership abruptly lurching decisively to the right. For instance, the Texas State House went from a 77-73 GOP edge to 103 seats in the Republican column, causing other Democrats to make the decision to change parties.

The one notable exception this bloodbath was the re-election of Harry Reid, but I contend that if it were not for the fact that SEIU technicians were controlling the electronic voting machines in Clark County, that would also have been a ‘W’ for Republicans, although Sharron Angle was not much of a candidate.

2012: And then there was the recall yesterday, where the Democrats and the unions were resoundingly thrashed. It was embarrassing.

Additionally, many localities, like San Diego yesterday, have had success by putting government pension reform on the ballot. San Diegans voted 70% in favor of such reforms, going head to head against government employee unions.

I don’t wish you to become over confident, but if we put together a good ground game our national nightmare may soon be drawing to a conclusion.

According to the Waukesha Patch….

“At 6:30 we already had our first lady in line,” said Jane Neill, chief inspector at the Waukesha West High School polling location. “And we had a line before we opened at 7.”

Within the first hour of the polls opening at West, 306 voters had already cast ballots, which is 10 percent turnout for that location.

Neill said the line to vote stretched to the street very early in the morning, which signaled a massive turnout. She said the line wasn’t even as long that early for the 2008 presidential election.

What does it mean? Considering that half of teachers, when given the chance to opt out of automatic Union dues withholding, chose to do so. That, combined with the improving economic conditions in Wisconsin, are very encouraging signs.

69k Jobs Added Last Week. Previous Week Revised Down from 115k Jobs to 77k. Umemployment rate rises to 8.2% Dow Plunges. And What Does the President Do?

Takes the day off to attend SIX fund raisers.

It’s over for the tiny Marxist.

Obama is NOT WORKING.