One of the highlights from CPAC 2012 that I haven’t gotten around to posting was Dinesh D’Souza’s speech and a trailer about a movie that’s in the works from the Producer of ‘Schindler’s List’, ‘Braveheart’ and other blockbusters.

D’Souza tells how Obama is executing his father’s anti-colonialist vendetta against America.

Why, for example, does Obama restrict oil drilling in America while promoting it in Brazil, Columbia and Mexico?

Wanna bet that Obama puts pressure on the major movie theater chains to squash this indictment of him?

While I was perusing YouTube trying to find video of the Marriott Wardman Park lobby after it had been littered with thousands of pastel index cards with “99%” scribbled on them (CPAC 2012), I found this panel discussion video taken and posted on YouTube by Lisa Miller, founder of Tea Party WDC. To see where we are headed, we only need to look as far back as what is currently happening in Europe.

This was another fascinating observation from the CPAC event that Citizens United and Andrew Breitbart held on Thursday regarding their new movie project, “Occupy Unmasked”.  As I indicated earlier, rather than approaching this from the mentality of the right, they went out and found people who were once deeply connected and embedded within the leftist movement to understand the mentality and tactics involved.

One such former leftist community organizer is Brandon Darby.  He explains that what appears to be disorganized mayhem is really very well orchestrated and not all of the players know that they are being manipulated into playing a role in a play about which they are totally unaware.

What we saw on Friday and Saturday at CPAC were mostly players from the Green Team working under orders from puppet masters.

As the panelists were speaking, two Occupy protesters walked up to the stage and unrolled a big banner attacking Kris Kobach, the secretary of state of Kansas. Kobach is a very smart lawyer who worked at the Bush Justice Department and was elected secretary of state in 2010. He has raised the ire of liberals because of his support for common-sense election reforms like voter-ID and proof-of-citizenship requirements for individuals registering to vote, both of which were passed by the Kansas legislature.

However, Kobach has also worked on immigration issues and helped Arizona legislators draft their immigration law that has been attacked by the Obama Justice Department. That law has served as a model for many other states, such as Alabama, that have passed similar measures in the wake of the Obama administration’s non-enforcement policy. Kobach was at CPAC to speak on an immigration panel.

There was only one problem for the protesters — they were in the wrong room (LOL!). Kobach’s panel was going on elsewhere in the hotel and he was not on the panel that David Keene was moderating or the one that was about to start. When Keene told the protesters that, everyone in the room started laughing at them and they sheepishly folded up their banner and left. They apparently never made it to the actual room where Kobach was speaking.

That was obviously a puppet master FAIL executed by mindless Greenies.

Brandon Darby’s talk on Thursday made me wary that these kinds of distractions were being employed to do something even more nefarious.  Fortunately it didn’t turn out to be anymore than bluster this time.

This spring, Citizens United will be releasing a new movie called ‘Occupy Unmasked’, which will blow the lid off of Barack Obama’s Goon Squad, which he unleashed against CPAC over the last two days.  Working with Andrew Breitbart, Steve Bannon, and two reformed leftists, Brandon Darby and Lee Stranahan, the very heart of the Occupy/ACORN movement and it’s direct ties to this thug president will be exposed to the nation.

They are describing the feel of this project as a War Movie and after witnessing what happened at CPAC I think they’re spot on.

Watch the trailer and discussion.

P.S.  I will sift through the rest of my videos to find and put up how the ACORN/Occupy movement is organized into teams as described by Brandon Darby.  The anarchist left has been organizing for decades, which sounds like an oxymoron, but it’s true.  We conservatives are woefully unprepared and somewhat ignorant about what is headed our way.  Obama and his anarchist, leftist buddies are a threat to the Republic.

I have an update from day two and a few pics, unfortunately  had to get on a southbound afternoon train and missed Col. Allen West, but I was able to catch a few more images from some behind the scenes and of course fellow Disrupt The Narrative blogster P. Henry had some interesting footage of an OWS invasion posted on PJ Tatler.

First I will say my Governor Bob McDonnell delivered a fantastic speech and took advantage of his CPAC moment to introduce himself to the nation. He eloquently outlined how his adherence to conservative principles has rewarded the citizens of the Virginia Commonwealth and resulted in budget surpluses and a #1 rank in job creation. He also outlined his families American military service from his grandfather to his daughter in Iraq.

Santorum is the only candidate who has called for medical savings accounts and consumer based health care reform solutions, was against TARP, and has not advocated for economy killing, carbon tax schemes based on the fallacy of man-made global warming. 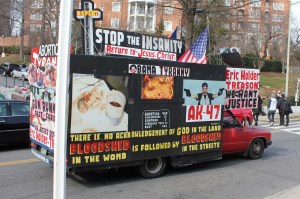 An activist exercising their free speech circling the hotel. 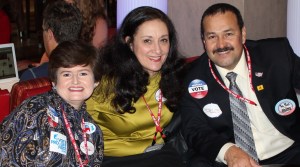 Try $60 per root.  They are all being paid by the union and don’t have any idea what CPAC is or why they’re there.  Click to see video.  Gotta run.  More CPACking ahead.  Internet access at the hotel is improving so hopefully I can show you the video I took of Occupy intruders being heckled, then ejected by the police later.  Cops are everywhere and they’re doing a magnificent job.

Santorum backer, Foster Friess, sums up Romney in one joke

Foster Friess introduction of Rick Santorum at CPAC 2012 began with the following joke which summed up Santorum’s competition quite well;
Over at the bar a couple doors down a consevative, a moderate, and a liberal walked in and the bartender said, What’ll you have Mitt?