Remember former (one term) Congressman Alan Grayson? Well, he ran a Red Light and hit a Bus on the way to a swanky campaign fundraiser.

Nearly shot my beverage out of my nose when I saw this.

ORLANDO, Fla. — Former U.S. Rep. Alan Grayson crashed into a Lynx bus in downtown Orlando about noon Saturday. Grayson was traveling to an upscale fundraising event for his Congressional campaign.

Authorities with the Orlando Police Department said the crash happened at Orange Avenue and Livingston Street. Investigators said Grayson was driving a Mercedes, when he ran a red light and hit the bus.

Grayson, the defeated one term Congressman, was seen running amongst the victims screaming ‘Die Quickly!!!’

OK. I made that part up.

McMartin is going to kill me for this. Grayson is his favorite target but I scooped him. McMartin loathes Grayson with the heat of a thousand suns! Well, maybe not that much. I despise the man myself but mostly think he’s a mere useful idiot, a babbling spokesdouche for a douchebag political party.

The worst campaign announcement ever. 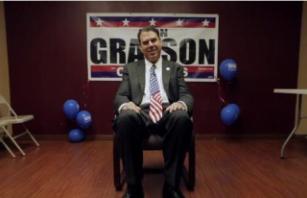 Alan Grayson, the despicable ex-congressman from Florida who was responsible for the worst House floor speech ever;

and the worst political ad ever in which he dishonestly edited a speech from his opponent and current congressman Daniel Webster. Has now made the most reprehensible, dispicable, and worst campaign announcement ever.

I’m in.  I’m running for Congress.

I’m running because I promised Charlaina and Rick that I would.  Charlaina
called me a few weeks ago, from the hospital.  She told me that her husband,
Rick, was suffering from multiple organ failure – lungs,
kidneys and liver.

Rick was 56 years old.  That’s three years older than me.

Rick was a veteran.  But the Veterans Administration wasn’t
covering his hospital bills.

Rick had had a bad liver since he was 30, when he contracted hepatitis.
No insurance company would go near him.

Every day Rick survived, his family owed several thousand dollars more to
hospitals and doctors.  And they had no way to pay
it.

I told Charlaina how sorry I was.  And I told her that I wasn’t in Congress
anymore, so I wasn’t sure how I could help.

She said: “You can run again.”

“You are the only person who ever cared about people like
us.  Rick wants people in Congress who can’t be bought and sold.
Rick wants you to run again.”

A dying man wants me to run for Congress.  What exactly could I say?

Wow, what a campaign announcement. This guy is a multi millionaire and he
tells Charlaina that since he is no longer in Congress with access to other
people’s money, he has no idea how he could help them with their several
thousand dollar medical bills. What a tool he is.

Alan Grayson, Still trying to dishonestly scare people into giving him their money

Remember Alan Grayson, the Florida Democrat who was voted out of office after producing one of the most dishonest ads in the history of Florida politics. He is at it again and today he sent out a fundraising letter from the Committee to Elect Alan Grayson. I am not sure what office he is seeking but this appeal claims that if the sale of an Orlando TV station to a Christian media company is approved by the FCC, the children of Orlando will never see Big Bird and the gang from Seasame Street  again.

For 46 years, Orlando, Florida has enjoyed public television and radio. And if the Religious Right has its way, that’s over.

Why should we care? Well, Big Bird helped teach my five children how to read. Maybe yours, too. My children have enjoyed Arthur, Dinosaur Train, Bob the Builder, the Magic School Bus, and Teletubbies. And I’ve enjoyed the PBS News Hour, Frontline, the American Experience, and Nova.

Unfortunately, however, the “Daystar Television Network,” a Christian broadcasting outfit, has waived $4 million under the noses of the directors of WMFE. (Due to inflation, what cost 30 pieces of silver in biblical times now goes for $4 million.) And the WMFE directors want to sell – to sell out.

But you can help to stop them, and keep Big Bird on the air in Orlando.

Everyone always complains about the media. Well, here’s something you can do about it. Let’s keep good TV on TV. Please help.

Paid for and Authorized by the Committee to Elect Alan Grayson

Of course the problem is that it is not true; oh sure enough the PBS affiliate WMFE which has been experiencing financial hardship for several months, is in the process of being sold, but according to Florida Today, the children of Orlando will not be without Big Bird and Elmo, or Bert and Ernie.

WDSC, the station at Daytona State College, and WBCC, at Brevard Community College are already available on Brighthouse, DirecTV and AT&T’s U-verse. The two stations do not air “NewsHour,” but they do carry “Sesame Street” and other popular shows. One of them could take over the role of flagship station in the Central Florida PBS market as WMFE goes off the air.

It just goes to show you that you don’t have to be a sitting congressman to be a lying slime-slathered reptilian wearing a human suit.

House members who voted for Obamacare have been reduced by   42 seats and counting.

Update:  Renee Ellmers pulled off the upset against Bob “Who ARE YOU?” Etheridge in NC-2.  Gang of 177.

Granted, some pro-Obamacare members saw the hand writing on the wall and decided retirement was preferrable to impending defeat.  Their replacements still went down to defeat.  Among the notables:

Many of these (*) were so-called “hold outs” who eventually caved, meaning they showed cowardice TWICE.  Once before Pelosi and Obama and once before their constituents.

Other victims are incumbents whose people got the opportunity to punish their representatives directly.  Some are long standing incumbents:

Tom Perriello. ** This one is particularly satisfying.  Obama went there on Friday.

I’ll stop now.  Many of these candidates were targeted by Disrupt the Narrative over the last few months.**  Not taking credit.  Just sayin’.

More Rationality From the Stewart Crowd….

With credit to SecularStupidest.com and Breitbart. See if you can spot the Alan Grayson supporter….

This ad is so dishonest, so silly, so over the top that it can come from only one slime-slathered reptilian wearing a human suit.

Other Democrats have hinted at the notion that Republicans want to leave Grandma broke, homeless, blind, deaf and in the gutter.  Grayson?  Not so subtle.

But what would one expect from the politician that has actually done more than any other to actually leave Grandma broke, homeless, blind, deaf and in the gutter?

On Friday, the DC newspaper Politico reported that:

(a) “conservative outside groups” have now spent over $9 million “slamming vulnerable House Democrats,” and

(b) the total against me will reach “at least $1.7 million by the end of next week.”

Think about that. I am only one member of the U.S. House of Representatives, out of 435. I represent one-quarter of one percent of America. And yet roughly TWENTY PERCENT of spending in the entire country by these

shadowy right-wing groups has been spent to defeat . . .

I feel so proud!

I must be doing something right.

Please contribute $25, $50 or more, to help us turn the tide against this right-wing special interest tsunami.

I am no psychiatrist, but it sounds like this guy is growing increasingly unstable. Then I got my update from the Cook Political people and it sounds like Grayson is done.

Lean Republican. Like a bad disease, this race is so toxic thanks to Grayson that both parties wish they could quarantine it. And House Democrats, who point to Grayson’s self-funding capabilities as an excuse not to get involved, basically can. But for now, the preponderance of evidence suggests that Grayson’s scorched earth “Taliban Dan” attacks against GOP state Sen. Dan Webster are backfiring. Editorial boards have excoriated Grayson for taking Webster’s words grossly out of context by rolling footage of Webster saying “she should submit to me,” when Webster had actually warned husbands against that advice. As one Republican noted, painting Webster as anti-woman is a curious line of attack considering Grayson referred to a lobbyist as a “K Street whore” just last year.

Webster has wisely avoided being dragged into a brawl with Grayson, almost avoiding the incumbent like he is a rabid creature, while the NRCC is up with ads calling Grayson a “national embarrassment.” Although Grayson backers say the Democrat’s off-script antics win over angry independents, boring may be better in this case. While Grayson-commissioned polling over the summer showed him in the lead while multiple third party candidates were taking a sizable double digit share of the vote, more recent internal GOP polling shows Grayson’s numbers have tanked. The antagonist Grayson is to Republicans what Minnesota Rep. Michele Bachmann is to many Democrats. The difference is that Grayson is running for reelection in a district and political environment tilted against his party.

Alan Grayson’s campaign has not only gotten off track, it is a complete train wreck, the wheels have come off and any other analogy you can think of. Or to put it in the congressman’s own terms; 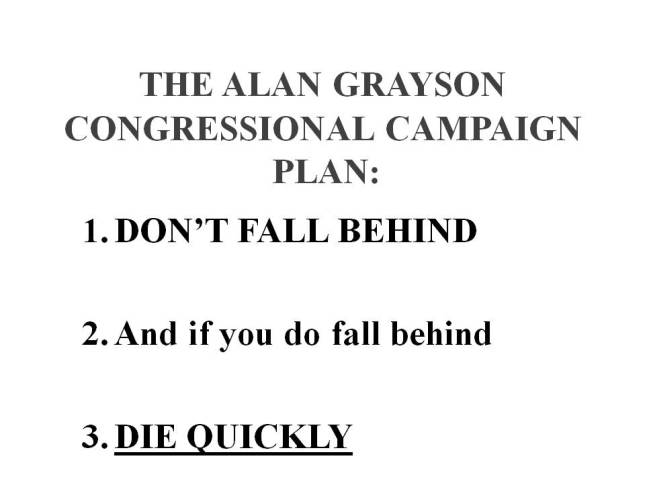 After his dishonest and despicable TV ad which grossly misrepresented his opponent Daniel Webster,  Alan Grayson is plummeting in the polls and is now 7 points behind. He is also doubling down by producing another ad which repeats the same lies but he believes if he identifies them as facts then they are facts. It is interesting that an incumbent would not run on his own accomplishments like voting for the failed stimuls and the extremely flawed Obamacare.

Looking to fall even farther behind the Florida congressman sent out a ridiculous fundraising email trying to portray himself as a poor victim of unwarranted name calling attacks. Here is his appeal for funds;

Apparently, Newt Gingrich loves a good stoning. Because he has joined in the stoning of our campaign. When he saw Sarah Palin, Glenn Beck and Mike Huckabee casting stones, Gingrich just couldn’t resist.

Huckabee called me a “nutcase.” Gingrich reached for a couple of heavier stones to hurl, calling me “a disgrace,” and “fundamentally dishonorable.”

I don’t know about you, but I am sick and tired of listening to the likes of Newt Gingrich, sitting in judgment of me, telling me and telling us how we should live our lives. If we ever carve a Mt. Rushmore of hypocrites, you’ll see Newt Gingrich’s pasty face chiseled in stone there.

Let he who is without sin cast the first stone. Everyone else on the right-wing, MYOB.

Seriously? This jackass actually uses “Truth” in his signature. He uses the old ” I know you are, but what am I” debating technique he learned in the third grade.

Recently on CNN’s “Situation Room,” he called Republicans “knuckle-dragging Neanderthals” . Has he ever looked in the mirror?