The Virginia Society for Human Life, the nation’s oldest pro-life organization, is looking to change the face of the pro-abortion majority in the Virginia Senate.The VSHL was founded in 1967, before Roe v. Wade, in reaction to an effort by dissident elements in the fields of law, medicine, public health and eugenics to “liberalize” abortion laws and continues to this day to work for the restoration of the protection of the life of the unborn child in law and public policy.

.In a recent interview with World Magazine, VSHL President, Olivia Gans, discussed the organization and their focus in the near term. While the VSHL is pleased with the passage of abortion clinic regulations in the last legislative session, she cautions Pro-Lifers must understand that while these regulations are important, they should be seen as a beginning point for a much larger conversation about protecting the unborn child.

Ms. Gans went on to state that right now,the single most important thing is this fall’s Senate elections. She points out that the pro-abortion majority in the Virginia Senate has been primarily holding up all major pro-life legislation for the past six years or more and they do not represent the pro-life view of the commonwealth of Virginia.

The Society is also talking to legislators about passing legislation that says no abortion can be performed after a baby can feel pain. Similar legislation has already been passed in Nebraska, Kansas, Alabama and Oklahoma. Scientists have measured that the child can feel pain from 20 weeks.

Gans would like to encourage people to go to the National Right to Life website (nrlc.org) and the website for VSHL (vshl.org). and get involved, if only to get on the email list.She said the VHSL is desperately in need of more talent, people who are good writers, artists, people who want to learn to be speakers or do computer work. I agree with the president when she stated, “This is probably one of the most exciting things you could ever do because your efforts will be used to promote human life in Virginia.”

How quickly can we build 74 miles of pipeline?

Not quickly enough, but it appears that Alaska is shovel ready and the flow of oil could be available within months.

Our national energy policy is…lacking in energy. Quite frankly, it’s an abomination.

When was the last time Obama had to fill up, out of his own pocket, his Yukon, his Air Force One, his Marine One?

This man is a horror. Second syllable of horror is optional.

Posted by P. Henry Saddleburr on March 9, 2011 in Abortion, politics

McDonnell Must Act on Cuccinelli’s Ruling on Abortion Clinics 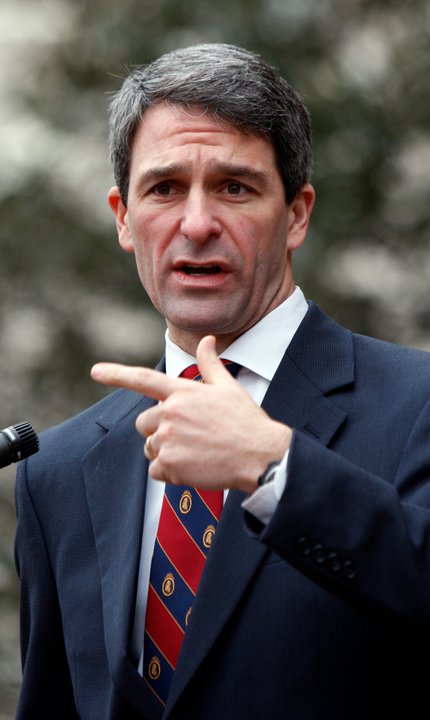 Back in August when Virginia Attorney General Ken Cuccinelli ruled that Virginia has the legal right to regulate abortion clinics in the same manner it currently regulates hospitals and surgery centers the pro abortion advocates claimed it to be merely an attempt to make abortion inaccessible.

The Attorney Generals office cited patient safety concerns. “The state has long regulated outpatient surgical facilities and personnel to ensure a certain level of protection for patients. There is no reason to hold facilities providing abortion services to any lesser standard for their patients,” said Brian J. Gottstein, a spokesman for Mr. Cuccinelli.

A horrid story of bloody late-term abortions may now lead to increased regulation and oversight of these outpatient abortuaries. Dr. Kermit Gosnell, a Philadelphia doctor, his wife and eight other suspects are now under arrest in Philadelphia.

Gosnell faces eight counts of murder in the deaths of a woman following a botched abortion at his office, along with the deaths of seven babies who, prosecutors allege, were born alive following illegal late-term abortions and were then killed with scissors, reports CBS NEWS.

Gosnell, 69, made millions of dollars over 30 years, performing as many illegal, late-term abortions as he could, prosecutors said. State regulators ignored complaints about him and failed to visit or inspect his clinic since 1993, but no charges were warranted against them, District Attorney Seth Williams said.

Gosnell “induced labor, forced the live birth of viable babies in the sixth, seventh, eighth month of pregnancy and then killed those babies by cutting into the back of the neck with scissors and severing their spinal cord,” Williams said.

The grand jury report states that Gosnell’s office was filthy; cat litter was apparently found inside the office.

Four of the suspects, some improperly licensed, also face multiple counts of murder for allegedly killing the newborns. All of the suspects are now behind bars after warrants were served overnight.

Authorities went to investigate drug-related complaints at the clinic last year and stumbled on what Williams called a “house of horrors.”

“There were bags and bottles holding aborted fetuses were scattered throughout the building,” Williams said. “There were jars, lining shelves, with severed feet that he kept for no medical purpose.”

Governor McDonnell has been slow to act, he must now act and move to addressing medical and safety aspects of providing abortions, as well as the record keeping and administrative practices of abortion clinics so we do not suffer a Philadelphia-like tragedy in Virginia.

Posted by Martin M. McMartin on January 19, 2011 in Abortion, Healthcare

The Wrath of Obama Care, Three Pennsylvania Catholic Hospitals to be Sold 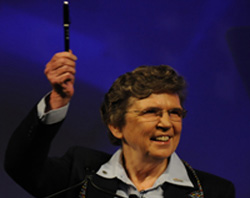 Sr Carol, AKA the Presidents Nun, she is either Pro-Abortion or Incredibly Stupid

Scranton, PA area residents will have more availability to abort their babies thanks to Obama care. The American Spectator does an excellent job laying out the very intriguing tale which includes the following elements;

1. Obama Care and the sale of three Scranton-area Catholic hospitals.

2. The re-election prospects of the two House members, Democrats Paul Kanjorski and Chris Carney, both of whom cast key votes to pass Obama Care.

Here’s the list of players — major and minor — so far.
• The President of the United States.
• The Vice President of the United States.
• Three Scranton-area Catholic hospitals suddenly for sale.
• The CEO of the three Scranton-area Catholic hospitals for sale.
•  Obama Care, otherwise known as “health care reform” or the “Affordable Care Act.”
• A Catholic nun.
• Michigan Congressman Bart Stupak.
• A pen.
• Victoria Reggie Kennedy, widow of the late Senator Ted Kennedy.
• Time magazine.
• The Scranton Times
• The two Scranton-area House members Kanjorski and Carney, both losing in the polls.
• U.S. Senator Bob Casey, Jr., a native and resident of Scranton.
• Congressman Joe Sestak, the Democrats’ nominee for the Pennsylvania U.S. Senate seat.

The story details Mercy Health Partners CEO’s acknowledgement that his decision to sell the threee hospitals was absolutely influenced by the Obama Care legislation’s increased regulations and reduced reimbursements. It then describes his retraction of that claim after pressure from Washington DC by a nun. Well not just any nun but the president’s nun. In fact the same nun who pressured Bart Stupak to vote for the flawed legislation, which of course does cover abortion.

In a fury that fairly leaps from the page, Sister Carol says immediately that “false motives” have been assigned to the proposed sale of the three Mercy hospitals. Says the good Sister: “Reports that health reform is the primary motive behind the sale are completely false, misleading and politically motivated. Deliberations to sell the facilities began well before the Affordable Care Act became law and did not hinge on enactment of the legislation.”

As you can guess it is fairly lengthy and detailed and I highly recommend you read it over, I think this story will grow some legs and will impact the upcoming election.